Beer Garden is located a couple blocks off of Sukhumvit Road, on Soi 7. It is what is known as a “freelancer bar”, a meat market in other words, where Thai women go to find a foreigner willing to part with some of his baht for a brief interlude of intimacy. With dimensions resembling that of a warehouse, there can be two dozen girls lounging around the maze of counters some nights, chatting with their friends while keeping their eyes peeled for a “customer”. If there is a heaven for lonely old men, it surely includes a place like this.

I ended up sitting next to Bam one July evening purely by accident. We swapped looks, but with her square, rather plain face and tiny figure, she didn’t make much of an impression. After awhile, to kill time, I got out my language notebook and begin practicing writing Thai characters. This is the way I meet women over here and it works amazingly well. When they see the pages I’ve churned out, demonstrating my seriousness, they practically fall over each other attempting to give me instruction. It’s a natural, nonthreatening way to make a connection. Soon Bam had joined the nearest barmaid in writing down Thai words that I’d comically mispronounce, which kept them both entertained.

Where Bam and I hit it off was when I had her write the words in Thai for “zero baht”. I copied them onto a small piece of paper then, reaching over the bar, took my running bill for the evening from its wooden cup and replaced it with my scratchings, all the while keeping a straight face. The audacity of this had Bam in stitches for the next ten minutes. (The barmaid was somewhat less amused, being responsible for the bill, but was a good sport once she realized I wasn’t trying to pull a fast one.)

No problem — he paid up!

This was the first of what became three consecutive evenings of at times uproarious fun. Bam would try to teach me some Thai while I looked for ways to send her into semi-hysterics. Although I like to see myself as a composed, somber individual, at heart I’m a comedian and am delighted whenever I find someone whose sense of humor is on the same wavelength.

When I showed up later in the week for what I hoped would be a fourth night of frolics, Bam informed me and the barmaid (who had become part of our little gathering) that she could not join us. Though I had been tipping my petite instructor five hundred baht each night ($14), this was not enough to pay the rent and she needed to find a serious customer.

If had half a brain, I’d have seen this coming. This was a freelancer bar, not a nightclub, and it was naive of me to expect a lady there to welcome my rib-tickling company night after night only to be left with a pittance. On the other hand, shelling out more baht for the company of someone I was having such a super time with might be a worthwhile outlet for my new riches.

Not being interested in trying to find another lady to entertain, I soon left for home. The featured music that night was grinding electronic garbage and I needed some quiet time to consider my next move. 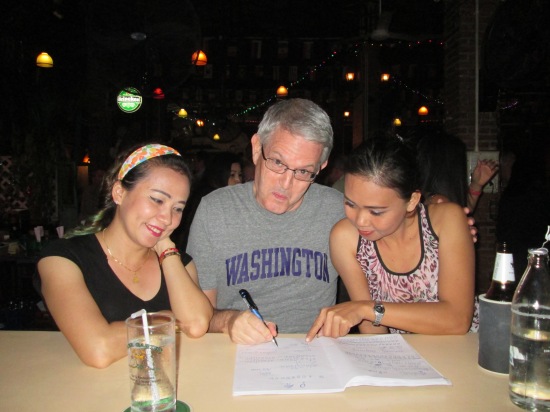 It took me only a couple of days to decide I’d up the ante in order to continue the fun I’d been having with Bam. Not being interested in half measures, I gave her a thank you card with ten thousand baht ($300) in appreciation of her efforts to teach me some Thai. This was also a signal that I was to be taken seriously, that I wasn’t just some funny but stingy foreigner. Soon after that Bam came home with me, spending the night when the wine I served proved to be too much for her beer-soft alcohol tolerance.

My decision to actually begin supporting Bam came from a visit I made to her apartment — something she insisted I do after she’d been to my place a couple of times. I’m still unclear as to why the invitation came. Did she want me to spend the night, or simply to witness how she was barely scraping by? Probably the later. Regardless, I was saddened when I saw her cramped accommodations — reaching out with my arms, I could almost touch both walls. On the left side was a worn dresser followed by a tiny table with a single plastic chair. On the right was the TV. Bam slept in front of this, atop a thin cushion which seemed to offer little relief from the rock-hard floor. A narrow street ran by the rear window and the roar of passing motorbikes drowned out any conversation.

Up to this point I’d been on the fence regarding this woman. Yes, we’d been having a blast when we were together, but her English was poor, which limited conversation. (Not that I should be complaining — after a half decade in this country I should be speaking her language.) And, horror of horrors, she preferred beer over wine. But the sight of her sad little room decided me. I would begin providing what is called Safety Money so she would not have to be scrounging for customers at the bar anymore. Perhaps find a less miserable apartment.

I only stayed a half hour at Bam’s before she hinted that maybe I should return home. Being escorted from her place through dark alleyways out to a main road, I stopped at an ATM and withdrew my first Safety Money payment of fifteen thousand baht (over $400). As I handed it over to her, there was none of the teary happiness that usually follows my largesse. She simply stood there, silently counting the bills without even a thank you. Then she made a request: was it OK with me if she continued going to the bar? Understanding that Beer Garden was where she hung out with her friends, I had no problem with this. But…would she still be going out with customers? The thought didn’t occur to me at the time and if it had, I would not have cared. As things turned out, I ended up detonating the relationship for a far more mundane reason.

After over six years in this country, I’ve gotten pretty good at identifying warning signs in potential girlfriends and quickly moving on. For many of the candidates, it’s a no-brainer. For example, the one who requested my email address and promised to send a message the following day, but didn’t get around to it for a week. Or the bargirl who, upon entering my apartment, made a beeline for the fridge where she ate the sandwich I was saving for lunch, downing it with a few swallows out of the milk container. A third set up a Christmas date, then cancelled with a phony excuse, leaving me alone with the wine and cheese I’d gone out and purchased.

Other women have required a more serious investment of time — and money — before I sadly concluded we were not compatible. Often being dependent upon me for support, they were understandably reluctant to bring up issues or fully reveal themselves. But eventually the troubles surfaced.

To try and shortcut this arduous process, I’ve developed an early warning system. It’s called the Tardiness Test and is stunningly simple: when I am getting to know a Thai lady, if she is glaringly late for our initial dates, or takes more than a few hours to respond to my calls or texts, then I say goodbye. Admittedly, some of this behavior can be cultural — this is not a nation of clock watchers. But this could also mean I do not rate very highly with this person, or that she is playing games to see how much I’ll put up with. Worst of all, she may be unreliable. None of these scenarios sits well with me.

Unfortunately Bam, the woman I’d decided to support, ended up failing the exam. For our first official get-together, I’d asked her to come by my apartment at 8:00pm. So what happens? She doesn’t even bother to leave her place until five minutes after. I ended up waiting outside by the apartment gate in the heat for some twenty minutes before going back in and it was another fifteen before she finally showed up.

Bam only stayed long enough for me to discover that nothing specific had delayed her. In fact, she saw the whole thing as rather funny. Teehee. Ha ha. Not sharing her amusement, but keeping my temper, I sent her back home, then followed up with a goodbye text. Clearly baffled, she responded by apologizing and saying I had made her happy. Maybe we’d meet again at the bar? I responded that she’d made me happy, too, and perhaps we would meet again. I like to get along with others and it would be impossible, not to mention silly, to try and avoid her at Beer Garden.

What happened here is my heart outraced my common sense. I did not take the time to get to know this lady (starting with the Tardiness Test) before my Savior Complex kicked in. It is so tempting help these women given my generosity and means, especially the ones I become fond of. I have to learn to keep my wallet under control. 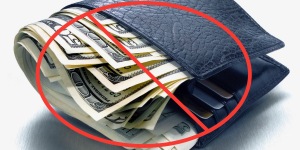 Unlike my previous financial forays, this one had a happy ending. After a few months of keeping her at arm’s length at the bar, Bam came up to me in early January in a friendly manner that would have been rude of me to resist. Soon I had my trusty Thai notebook out and was learning impolite phrases amidst wine-fueled toasts to the New Year. Near the end of the evening, I slipped two thousand baht (almost $60) into Bam’s purse. I’m no longer her Sugar Daddy, but am happy to leave a lavish tip for memorable occasions.