Why are so many Western men becoming romantically involved with Asians? Put that question to some of my American countrywomen and you can get some provocative responses:

“They just want their own little slave.”

“They cannot deal with an independent woman.”

“No American lady will have them.”

The first opinion makes a nice starting point for this discussion: the notion that Asian women are docile and submissive creatures. Indeed, it is this misguided impression that often initially draws unknowing men into the fold. What they don’t understand is that their new, exotic girlfriend, while on the surface appearing to accede to their every wish, actually has her own agenda along with some subtle means of pursing it. Far from being a master/slave relationship, it’s more often a case of the man experiencing the illusion of control even as he scours the fresh produce at the local market on his way home after work, searching for some out-of-season tropical fruit that his loved one has shyly requested for that night’s dessert.

The second and third viewpoints imply that Western men seek out Asian companions due to personal problems or deficiencies. While there’s some truth to this, I think it’s also a case of them wanting a more traditional partner. Less opinionated, perhaps. Asian cultures, with their emphasis on family, education, and aversion to take-no-prisoners confrontation therefore have something to offer. For many “nice” guys, who often struggle to decipher the expectations of the fairer sex in their home countries, this can be an intriguing alternative: a woman from a stable background with a degree, who does not expect her husband to have an opinion about Hillary Clinton. Someone with a genuine appreciation of kindness and sensitivity in a man, while offering in return an enticing sexuality.

Which brings us to what is probably the biggest motivation for men to longingly gaze East: appearances. Almond-shaped eyes, raven-black hair and lithe bodies…well, sometimes. Regardless, the gene gods have certainly been kind to what has been described as the world’s most feminine women. At the same time, their Western counterparts (read: Americans) have become super-sized — a condition for which they have only themselves to blame. Happily, McDonald’s is attempting to level this playing field by opening cholesterol-saturated eateries in every Asian country this side of Inner Mongolia, though the West retains an imposing, belt-busting lead.

Ultimately, it’s a tradeoff. Yes, a lonely western man can hook up with an Asian girlfriend whose looks cause traffic pileups, but she will require a special kind of caring and understanding. In return, a whole new world can open up for both people. One complete with unusual cuisine, comical misunderstandings and fresh, thought-provoking perspectives. It’s also an opportunity to discover a few things about oneself, perhaps emerging as a more flexible, self-aware person.

No guy is totally immune. 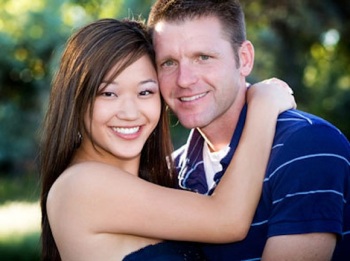 And you don’t need to be famous!