It had been a busy, but agreeable two month vacation in the U.S. and I was fully refreshed to take on the biggest challenge of 2013: the twenty-one-hour ordeal required to fly from Seattle across the Pacific, then down to Thailand. This has always sapped my strength and last week was even more of a struggle than usual. Through Expedia, I had booked the flight on ANA (All Nippon Airways) which in turn was operated by United. It all sounded straightforward enough, but appearances can be deceiving.

When I arrived at SeaTac airport a few hours before my departure, I had assumed I had to go and wait for the ANA desk to open up when in fact I should have immediately gone to the United kiosk to check in. By the time I had been informed of my error by a Japanese ANA employee, any chances of reserving a window or aisle seat for my flight had vanished. I ended up spending some ten hours wedged between a Japanese businessman and Korean college student. In my younger, more energetic days, I would have attempted to make conversation with either or both of them. Instead, I glumly programmed some vintage rock and roll from one of the music channels and melted into my seat. A few hours later, after having listened to David Bowie’s Rebel Rebel for the fourteenth time, I switched gears and watched Iron Man 1. Events slid into a sleepy blur after that.

I had a four hour layover in Narita airport outside Tokyo. Since I’d once lived in Japan, there was a sense of nostalgia seeing all the neatly dressed ladies in the upscale stores selling jewelry, tobacco, or chocolate (all non-dutiable!). Even the girls working at McDonald’s exuded an air of controlled prettiness. And of course everyone was excruciatingly polite and friendly. Entering the plane for the flight down to Bangkok, I had to battle back an urge to bow to the stewardesses.

From Narita, it’s a six hour flight down to Bangkok’s Suvarnabhumi Airport. Because there had been a recent typhoon in East Asia, we had to endure seemingly endless intervals of low level turbulence. My two seatmates slept through the bumpiness while I could only glance over in envy as I took in yet another movie, my hands firmly clutching the armrests. When we had finally landed, it was a real effort to let go.

By the time I’d cleared Thai customs, I’d had maybe two or three hours of sleep in the past forty-eight (I rarely rest well the night before flying out, and have never been able to sleep on a plane). This grogginess led to my leaving my debit card in one of the airport ATMs after wrestling with it to extract some Thai baht. I didn’t notice the loss until I was almost to my apartment. Fearing the worst, I hailed another taxi and sped back out to the airport, swearing under my breath the entire twenty-five minutes. Thank heavens it was the middle of the night and I did not have to contend with any traffic jams. The extra stress would probably have resulted in some kind of stroke.

Unbeknownst to me, ATMs are now programmed to “eat” any card that remains in the slot for a certain period of time. It was therefore a straightforward matter for one of the girls at the currency exchange booth next to the machines to get a key and open the one I thought I had used. But my card was not in there! It turns out there are two groups of ATMs on the ground floor of the airport and I had gotten them confused. The girl had to walk down to the other pair to retrieve my card, a bit annoyed at my stupidity. I didn’t blame her and even offered to pay for her trouble — a standard gesture that works well with the kind of ladies I’ve come to know in Bangkok. But she couldn’t accept it and was far more interested in filling out the required paperwork to get me out of her hair. I walked back out to my taxi driver who’d been waiting and for the second time that night rode from the airport to my apartment. Upon arriving I was so keyed up from the stress it was a good two hours before I was finally able to plop onto the bed and drop off. (I spent the time unpacking.)

Why do I endure such misery? As I am always telling my friends, Thailand is not really my cup of tea. Too disorganized and raucous. At no point have I seriously considered spinning out my retirement years in this country and someday I will pull up stakes and go. Then again, others may view my actions and come to a different conclusion. As she handed me the apartment keys, signaling the beginning of my third year in Bangkok, the office manager gave me a knowing smile. “Welcome home,” she said. 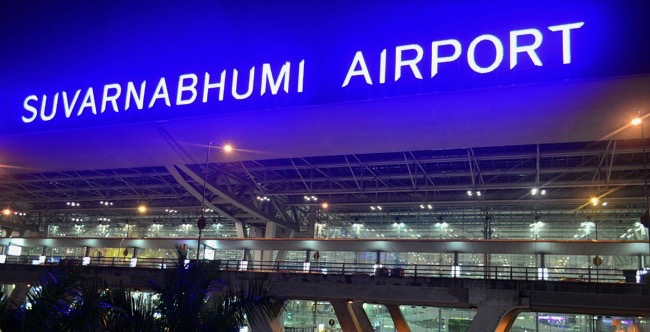 Two visits in one night — becoming a regular.