Seeing a crummy weather forecast for tomorrow, I got out of the blocks at 7:20 this a.m. The goal was to do the long trek to Sheridan, setting up at worst a half day ride into Buffalo. If the rain gods then caught me — which did happen — I wouldn’t suffer unduly. An exemplary example of commonsense, self-motivated planning.

A milestone was reached early on in the day when I crossed the state line into Wyoming after almost two weeks in the “Big Sky Country”. The highway became smoother and began running in a southeasterly direction — perfect for absorbing the gusts out of the northwest.

With the wind blowing me through long downhill grades, I hardly had to pedal at all for the first nine miles, causing my affection for this new state to blossom. I made such good time in fact that I decided to continue on to Sheridan for lunch rather than stopping in Ranchester. Later I ended up consuming a small Hawaiian Style pizza, which like many of the things I’m eating nowadays tastes like the best food in the world.

I’ve begun reading “The Straw Men”, a light (as in not heavy) paperback picked up at one of the Little Bighorn Battlefield tourist traps in lieu of some weighty tome about Crazy Horse. So far it is proving to be a real page turner and a welcome diversion from TV.

But I mustn’t badmouth the boob tube too much. After all, I’ve really been enjoying the PBS rerun of The Civil War. Every night I make the effort to locate the Public Broadcasting Channel and find out when the program will start. It’s nice to have some intellectual stimulation to offset the day’s physical demands. 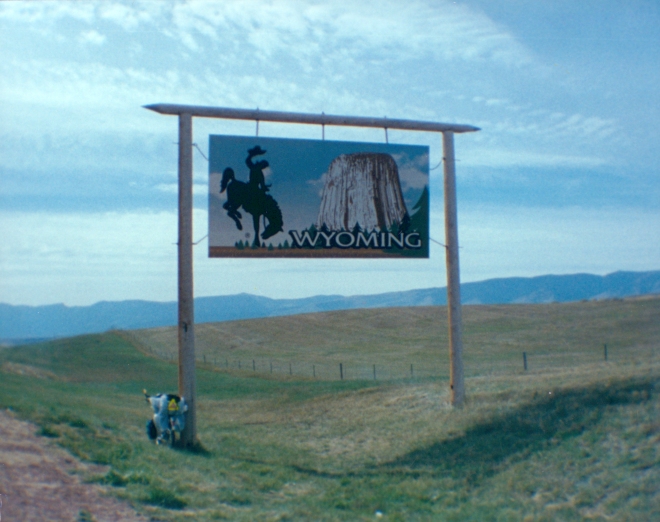