If given the choice, I’d always opt for cycling in chilly weather, avoiding the heat, but this morning for the first time in my trip it was unpleasantly cold. I bundled up like a cross country skier; the mittens didn’t come off until almost lunchtime. The low temperatures, combined with the recent demanding rides, made it hard to establish any kind of pace. I struggled through most of the day.

But why worry if my tank was near empty? This was the final time I’d have to be putting out this kind of effort.

Lunch was in a charming small town called Swea City, where I read the local paper looking for references to people I might know. Continuing to toil into the early afternoon, I took two extended breaks to insure that in my eagerness to finish I did not overexert myself.

I stopped at a convenience store in Buffalo Center to get directions to the Gruis Golf Course where my dad, brothers and I had played many a round. This required me to pedal into the annoying south wind that had been blowing across my flank all day and my speed slowed to a barely detectable crawl. When I finally rolled into the parking lot, thrilled to at last be in a place I knew, the club house was deserted and the only public phone did not work. Alas, still alone.

The final fourteen miles were an agony with hill after hill coming at me like breakers on a beach. It was an entirely new perspective on the rolling topography of Northern Iowa. Until now, the country road I was laboring on had simply been the quickest way to get to the golf course in the family SUV. Now I saw it as a malevolent entity out to sap my will to continue.

My home town slowly, grudgingly, came into view. The light blue water tower; the high school; tops of a few downtown buildings. Each time I crested a hill — using the bare minimum amount of any stand-up, hard pedaling — more were revealed. Entering the town, half exhausted, was like breaking through a barrier.

I still had a couple miles to go and was contemplating how to best get to my parent’s home when another cyclist came up behind me. After what I’d just finished enduring, I didn’t feel much like talking, but gradually warmed to the task. We compared bikes and discussed trips we had taken. (Not wanting to get into the details of my little voyage, I told him I was doing a tour of the northern part of the state.) He was breaking in a Trek 5200 model. I envied the bike’s special shocks and, of course, the lack of cumbersome traveling gear. Talking with him made the final mile home go much easier.

We cycled through town and parted company at the local Pamida on the northeast edge as he continued on Highway 9. The pay phones at the store were both out of order, so one of the clerks let me use the one at the Merchandise Return Desk to call home. I wanted to let the parents know I was just minutes away. As an early celebration, I went to the beverage aisle and selected a grape Shasta pop, but when I tried to pay for it, the cash registers were also on the fritz. (This was the kind of day when petty irritations abounded. Good thing I’d decided beforehand to remain calm.) I asked the checkout girl what she thought the price of the pop might be. Maybe a dollar. I left a dollar fifty, just to be sure.

Rode around to the back of the building and took a long, lingering look…
The sun peeking between a fluffy line of clouds.

A few trees starting to turn. Blurred reds and browns.

A dry, crackly cornfield, its army of tassels marching down towards an antebellum-style house.

Ahead of me, the familiar, ruler-straight avenue leading home.

For a brief, unforgettable moment, I was king of all I surveyed.

I pushed off, coasting down the quarter-mile-long hill, stopping at the ‘T’ intersection at the bottom. Then past the dark, brooding East Woods Park on the right which gave way to the city golf course, surprisingly lush and green under the autumn rays.

Turned left just before the sturdy steel mailbox that was older than me. Glided down the rock driveway and up onto the concrete that fronts the garage. 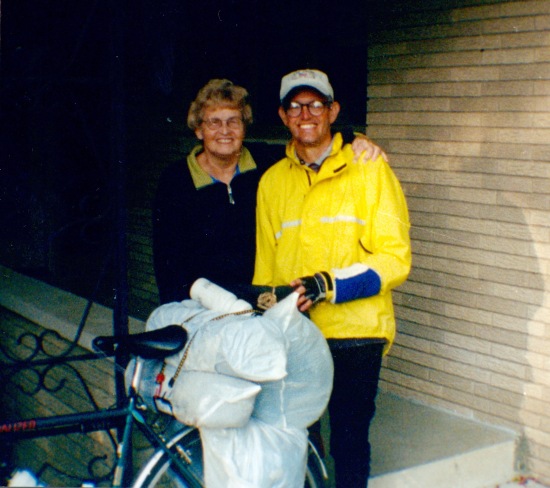