Jim Caudle was a farmer and a cattleman. His handsome looks were enhanced by premature white hair. An energetic, rugged man, he would ride his horse long distances on purchasing trips. Amongst his neighbors, who called him Jack, he was regarded as somewhat of a cattle baron and eventually owned more than one thousand acres of land in Iowa and South Dakota.

Emma was a large, pleasant woman who was often sick due to a bad heart. Like most farmers’ wives in those days, she had to cook for a veritable army of children and hired hands, especially at harvest time. It was not a very comfortable life compared to today. The seed for the following spring was stored in an upstairs bedroom and it was a challenge keeping the mice away. The couple did not have a telephone until years later when they retired in town.

While courting Emma, Jim sometimes walked the few miles between their farms and on one occasion was attached by a pack of wild dogs. Had he not been carrying a walking stick to beat the animals off with, he would have been badly hurt. As it was, he escaped with jut a few bites and scratches although his clothes were torn.

Upon getting married, Jim bought the Vollenweider farm from Emma’s father and the two settled down to start a family. Sadly, none of the first three infants survived more than a couple of days. The couple’s fear of never having healthy children was finally dispelled with the arrival of James Wylie just before the turn of the century.

Life in the Caudle household could be both affectionate and chaotic. Jim would often bounce Emma, who weighed close to two hundred pounds, on one knee and his daughter Lucille on the other. The three boys were the usual rambunctious types, getting into mischief. What one brother could not think of to tease their sister Lucille with, another one would.

In 1927, in his late fifties, Jim came down with pneumonia that slowed him considerably and left him susceptible to colds. A few years after this he and Emma moved to Ellesworth, leaving the running of the farms to the sons. The oldest, known in the family as Wylie, tried to make a go of cattle farming on the South Dakota acreage for a few years, but ended up coming back to Iowa. A son-in-law, Glen Wilson, also worked a farm, which unfortunately led to some money disputes.

After attending a family reunion in the summer of 1940 (held at a place called Brigg’s Woods near Webster City), Jim came down with a cold that developed into pneumonia and passed away not long after that. His last words were “I think I ain’t gonna make it.” His daughter Lucille, who was in the room, then said the Lord’s Prayer next to his body.

Actually, Jim’s health had started to fail before the reunion. When the pictures were later developed, people were shocked at how frail he appeared. (Far left in below photo.) 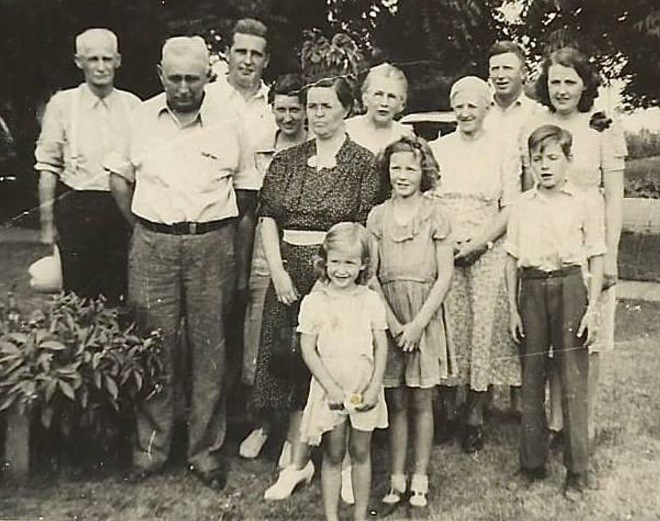 Emma continued to live in town and tended a garden. She became a rather attractive woman in her later years, finally suffering a stroke and dying in a nursing home the day before Thanksgiving, 1950.

The four children who died in infancy are all buried in the Williams Cemetery. Two are on the Vollenweider lot, and the other two are nearby in the front row by the road. 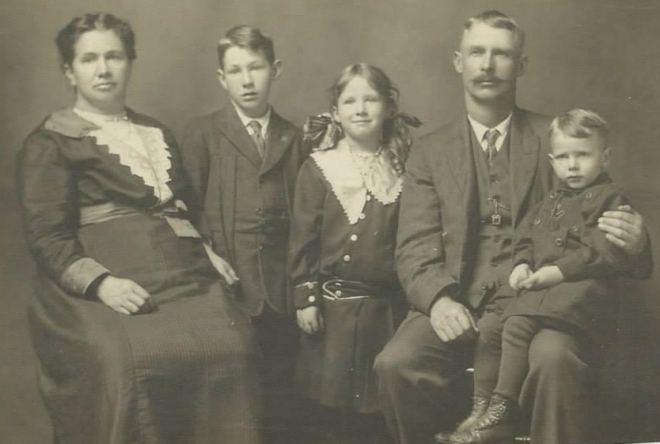