Welcome to Seattle, home to such world-famous companies as Amazon and Starbucks. A city with a proud tradition of liberalism and bold entrepreneurship, its gleaming skyscrapers and mammoth sports stadiums a source of wonder and awe.

Then there are the homeless… Walking a mere two or three blocks about the downtown core guarantees your coming across someone in need of help. Stop at a storefront window or an ATM, and sooner or later one of them will sidle up and ask you for money. It can be uncomfortable for a first-time visitor.

I am of course no stranger to panhandling, living as I do in an area of Bangkok frequented by rich tourists. At any time in the evening, there are maybe a three or four Thai beggars camped on the sidewalks along my street. Their spiel is well-rehearsed and effective: outstretched hands, pleading eyes…maybe even a barefoot, malnourished child who trails you for a few steps, rattling coins in a plastic cup held out in front of her. My least favorite of these performers is an emaciated elderly man who, when ignored, will bang his metal cup upon the curve to try to embarrass his target into making a contribution. Someday I’m going to swat that utensil right out of his hand and into the next district.

By contrast, the destitute in Seattle are not anywhere near as organized as their Bangkok counterparts. Some of them simply display crudely made signs soliciting contributions as they sit on public benches or lean against sheltered storefronts to escape the rain. Others merely amble about in damp, worn clothing, occasionally muttering to themselves or shouting profanities at invisible entities. From the perspective of the workers and shoppers hurrying by, they are largely indistinguishable from the discarded McDonald’s hamburger wrappers or Starbucks paper cups that blow along the pavements. This sad scene repeats itself in every medium to large-sized U.S. city, and it is both puzzling and shameful that the richest country in the world should have a transient problem which resembles a developing nation like Thailand.

Perhaps my aunt Ginny can shed some light on the situation. She is bi-polar and for a number of years after her husband left her, lived the life of a street person in various towns and cities in Southern California. From those locations she would often write or call my father, attempting to wheedle money out of him. The family eventually decided to fly Ginny back home to Iowa in order to provide upfront help, but this proved a failure. The “counseling” sessions turned into a wrestling matches as Ginny resisted well-meaning, but amateur attempts to get her to fly right. Soon everyone basically threw in the towel and Ginny once again drifted from one town to another, this time in-state, occasionally showing up at the doorstep of an embarrassed sibling.

The quandary was that we could not force Ginny to get help. There are understandably strict laws against involuntary committal, and she was adamantly opposed to any inferences that she should be seeing a professional health care worker. In other words, if she wanted to live the life of a vagabond and not take her medication, there was nothing we could do to change that self-defeating behavior. The same is generally true of homeless, mentally ill sufferers throughout America. There doesn’t exist a standard, reliable process to re-integrate them back into society.

Ginny’s story does have a happy ending, though. After returning to the West Coast, she entered halfway house and from what I’ve last heard, has begun putting her life back together. (My father’s passing removed all remaining hope of obtaining handouts from the family.) Obviously a very patient person or persons at the house are providing the support Ginny so desperately needs. It’s too bad there aren’t more of these types of helpers. The desperate people left out on the streets and their myriad of needs will always be with us. 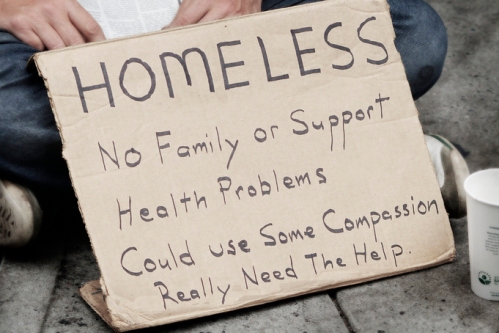