Rain, wind and bad roads. What more can a cyclist ask for? At least I was prepared for the precipitation and ended up having to cope with only a few passing showers. And the south wind, though chilly, was nowhere near the Great Northern Express that barreled through two days ago.

The crappy highway was another matter. Over various stretches were networks of cracks that had been filled in with rubber. Overfilled. Every ten to twenty yards would bring a double thump as the tires passed over one of these ridges. I had to slow down for the more prominent ones to reduce the risk of a flat or broken spoke. Bicycle speed bumps, I got to calling them.

The second, and mercifully short, road challenge was the four miles of Highway 44/183 going south from the village of Witten. Both the regular lane and the shoulder were so uneven I had to inch along in low gears. The asphalt must have been poured by someone in a hurry.

At least the home stretch into Winner was uneventful. The rain slacked off, the temperature rose a few degrees, and the shoulder was wide and smooth. If there ever was a point where I crossed over into civilized South Dakota, that was it. There was also was more nature in contrast to the often barren landscape that had accompanied me for so long.

Only a few minutes after checking into the hotel and entering my room, I started having trouble with loud neighbors. First it was some rowdy kids next door who sounded like they had enough energy to star in that battery commercial with the Energizer Bunny. I quickly went to the front desk and changed rooms, moving up to the second floor. Yet in my new digs I can hear the TV below me, and my next door neighbor just started playing some kind of instrument. I’ve banged on the wall, but it didn’t do any good.

Still, it’s all relative. It started pouring outside about fifteen minutes ago and given the choice between being out in that or putting up with a few small unpleasantries while I’m all nice and dry, I’ll opt for the latter.

You are now entering the Twilight Zone…

😵 On the way back to the hotel after dinner, a group of teenage girls, who had for some reason tried to strike up a conversation with me earlier, began shouting and screaming at me from a distance.

😵 Entering the hotel, the smoke alarm was going off in one of the downstairs rooms. Maybe one of those lively kids got careless with matches?

😵 My phone does not have a dial tone. Ten minutes later, it does.

😵 The bed lights do not turn on. Later in the evening they do — by themselves.

High Point of the Day: Watching a deer gracefully bound over a fence and dash across the road in front of me.

Low Point of the Day: Cycling to the top of a small rise and looking out over the sweeping, dismal landscape. Felt like I was the only person on a dark, forgotten planet. 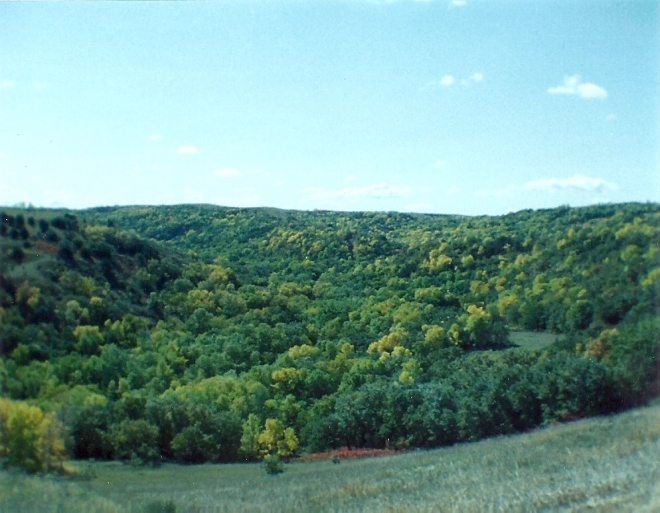 How green was my valley?